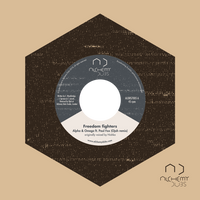 From the recording Freedom Fighters ALDBS7005

This track first appeared on Alpha & Omega’s “Overstanding” LP from 1991, and was originally voiced by Nishka. The vocals featured on this remix version were recorded by Paul Fox at a later stage. Some of the original stems have also been used here and others have been re-recorded and reprogrammed.

On the B side we find of course a dub version. In this case, out of the different dub mixes, the dubplate mix was chosen to go on the record.

Under license to Alchemy Dubs 2018
all rights reserved
www.alchemydubs.com

They killed off all my friends
Malcolm, Marcus Garvey and Martin Luther
The rest is too much to mention
And the whole world is mad

They lie, shoot, kill and maim
And tell them that they're all gone insane
Claiming that they should be locked away
Just because they call for human rights